It’s Tuesday the 3rd of April today. A day that in my agenda is not known as a special day. Other than being glad I survived Monday and hoping I could switch this day for Friday it’s just another to be grateful about, ordinary day.

However I am thinking pretty lightly about this day. In Britain it’s lately known as ‘ the punish a Muslim day’. Two weeks ago several Labour Party Members of Parliament have received a suspicious package, presumably because they are Muslim. In fact, some of the packages included a letter that calls for violence against Muslims, according to the British newspaper The Times.

In this letter there is a reference made to this special day to punish Muslims. That day being today. This letter is going viral throughout whole London. Whether that be on social media or placed on someone’s doorstep it’s making all the Muslims based in Britain aware that on 3 April they are being targeted. The letter states that people can earn ‘imaginary’ points by scolding a Muslim, subtracting a headscarf from a ‘Muslim’ woman and throwing acid in the face of a Muslim etc.

Luckily the British authorities is seeing the anti-Muslim campaign as a hate crime and granting the safety of the Muslim locals. The anti-terror police is doing the necessary research and trying to bring an end to this terrifying day. Meanwhile, people have also launched a counter-action. Under the heading of ‘love a Muslim day’. You can earn again imaginary points by smiling at a Muslim or for example participate in the Ramadan. As I am trying to wrap my head all around this, I dare you to spread love on this ‘special’ day. Throw it around like confetti, all at once and with a pure soul! 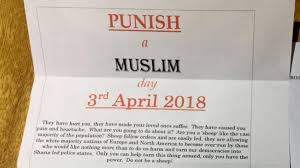