As “being woke” became part of our generations vocabulary – let these Trinidadian men inspire you to stay woke. Think less about which aesthetic food spot you are going to visit next – think more about how these places can be a scarcity for our future generations.

To me, thinking about Africa means thinking about my roots: where I come from, where it all started, and what the history of my family is. Just as important: the root of where life comes from – in which food is definitely a major component. It is obvious that one needs to eat everyday. However, often times we do not even think about the farmer who grows our vegetables – the supermarket sells all you need anyway, right?

Think again. In 2050 the world population will be consisting of 9 billion people – and supermarkets simply do not have enough food to provide to each one of us. No, this is not only about Africa, but also every other continent on this planet. Yet, there is a solution. Meet Agriman: the superhero who inspires and teaches children about how easy it is to produce your food, to feel ricesponsible for every rice grain you waste and his companion PhotosyntheSista can explain perfectly what photosynthesis is. This all happens through art, cartoons and music.

The brain behind this is Alpha Sennon (30) the founder and executive producer of WHYFARM– We Help You(th) Farm. Last November, he blessed the stage of TEDxAmsterdam, together with his brother, Akinola and ofcourse Agriman with an unknown energy.

I spoke to these men – all the way from Trinidad & Tobago – to tell me about how they inspire the youngsters of our time to make farming actually cool. Disclaimer: from now on you will start using the word agricoolture.

Alpha, have you always been an agricoolture-geek?

Alpha: “Let me tell you this: I grew up on a farm and I did not like it – it was not cool or fun. While my friends played videogames, hide and seek and watched cartoons, I had to spent most of my time at the farm. And farming is just something you have to put a lot of time in. I just knew: when I grow up, I want to distance myself from it. When I started studying I was kicked out of school because I was not doing well, nor had I passion for what I was studying. One day my dean told me: why don’t you try agribusiness? I had no idea what it was, but from that moment on, everything became clear.”

Alpha: “I realised that when it comes to food security – we are only trying to look for a quick solution, not a sustainable solution. When I started university, that is when I first heard about food security, but we cannot wait until university to teach our children about this. If it is one of the pressing problems of this time, how come that our children do not know what it is or do not want to hear about it?”

I can imagine that food security can be something complex – as most world problems are often a complex thing. How do you connect with the children?

Akinola: “First and foremost, I think that art and music can be seen as the highest form of communication. It’s a three-dimensional mechanism to communicate a message: by looking, listening and feeling. So we use songs, poetry, spoken word, drama and cartoons that resonate have a message to the children. If one person watches an Agriman animation and decides: “I’ll cook one cup of rice less because I always have too many leftovers” – you see how something small like this can save many cups of rice over time.”

Agriman & Alpha: “It is all about rebranding it. You have to say swagriculture, so that children hear “swag” which pokes their curiosity and makes them ask about it – and then you can get into workshops with them. That’s when you can show them that agriculture is not something boring or dirty. Last week, at one of our workshops, a little girl came up to me and said: “I want to be a lawyer, but I also want to be a farmer. Is there a job for me when I grow up? And that’s when my entrepreneurial mind comes in and says: “You have to create that job”. When I was a child, a lot of jobs were not there that we have now. Take social media: people are being paid thousands of dollars to just sit behind a computer and update someone’s status. The smile on her face after I told her that it is possible – that is what I am doing it for.”

The rebranding really works – but where does the negative tendency towards farming and agriculture in general comes from? Even in The Netherlands I do not know anyone who wants to pursue farming as a career.

Agriman: “I remember when I went to school, we had a Career Day: a day on which you could dress up as the person you want to be in the future, and people from the field talk about their job. The policeman would come, a doctor, a lawyer, but I never saw a farmer. Children grow up by thinking they will become engineers and pilots because that is the only thing, which is shown tot hem. If I am a good citizen, do I need a lawyer? No, not necessarily. Do I need a farmer? Yes, every day, three times. So do not tell me that being a farmer is not a career.” 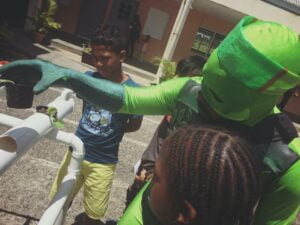 Akinola: “Another major factor that contributes, is Trinidad’s colonial history. And as all the colonial stories – someone wanted the land more than the original inhabitants, and they were all derived. That’s when they started to bring in slaves from Africa, who did the agriculture. In our country, agriculture is largely linked to slavery and oppression, which contributes to a lack of wanting to be part of it. Even though you were not part of the slavery process, the idea of it transcends to other generations.”

Summed up: we are dealing with a major world problem – and art might be the key for an agriculture revolution we need. Is there anything you want to add to this?

Akinola: “Speaking as a muslim, and the other muslims in the organisation as well, I think it is important to also rebrand the muslim youth. In today’s world, the media often projects islam in a certain negative way. We have to underline that this youth has a yearning to make social changes, to do community work and care about the development of humanity. I personally stand proud of this element to defeat the ideas that mainstream media projects towards us as a people.”

WHYFARM is becoming a worldwide initiative and has expanded to ambassadors in Europe and Africa – and they might be even starting a revolution. May this initiative from our brothers from Trinidad & Tobago be an inspiration to us all – be it on our awareness of our roots and food, innovative ways to deal with agriculture or the responsibility that has been laid upon us when it comes to the choices we make daily.