British Vogue magazine exists 102 years at the moment and even after all these years we got to celebrate a first this week: Somali-American model Halima Aden graced the cover with fellow models. Making it the first ever hijab wearing model to do so.

Aden shares the cover with 8 other bold women who surpass the cliché model looks we have been bombarded with the last decades. We see women of all types of races, shapes, hairstyles. As some people were saying online; it finally feels like diversity done right. But it had to be done right. Ever since Edward Enninful became the newest editor in chief for British Vogue, the magazine is determined to change the game. Cause mind you, it took over 50 years for the British vogue to feature a single black woman on the cover in 1966, Donyale Luna was her name. After that Naomi Campbell was the only black model to be featured a single cover 5 times, 2002 being the last time. After that it took the British Vogue 13 years to put Jourdan Dunn on the cover. With that being said you can basically use one hand to count the ladies of non western ethnicity who graced the cover and that is a sad thing.

When discussing diversity it is important to mention that is not just a checklist for magazines or editors. Changes happen in the editorial meeting and we are noticing that. Ever since Edward became the first ever black editor in chief the magazine has seen a shift in model selection. Diversity, inclusion or however you wanna call it is not just a one year issue for magazines, it is a overall change of mind and attitude. That’s why it is not only important to put the right models on the cover. You have to put the right people in the right positions. Maybe one day we will see Halima, cover the British Vogue in a single cover. But fort he time being, let’s celebrate all the ladies on this cover. Go follow these ladies online, let’s make their platform bigger and bigger. We are rooting for you all! 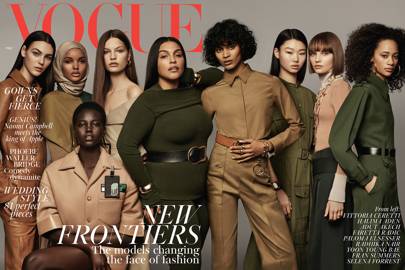