Someone sent me these qoutes written bij a man name Gerald Hanley I felt the need to share.

This is from his book Warriors: Life and Death Among the Somalis “A Somali always felt himself to be twice as good as any white man, or any other kind of man at all, and still does, even when he is wrong. Islam does wonders for the self respect of non-white people and Christianity is right to worry about the spread of Islam in Africa, and must honestly face the question of why it has happened – ” “Of all the desiccated, bitter, cruel, sunbeaten wildernesses which starve and thirst beyond the edges of Africa’s luscious, jungled centre, there cannot be one more Christless than the one which begins at the northern foot of Mount Kenya and stretches to the foothills of Abyssinia, and from there to the dried-out glittering tip of Cape Gardafui where the hot karif winds blow in from where the long sharks race under the thin blue skin of the ocean. You can never think of those wildernesses without thinking of daggers and spears, rolling fierce eyes under mops of dusty black crinkly hair, of mad stubborn camels, rocks too hot to touch, and blood feuds whose origins cannot be remembered, only honoured in the stabbing.

But of all the races of Africa there cannot be one better to live among than the most difficult, the proudest, the bravest, the vainest, the most merciless, the friendliest; the Somalis.” “I knew an Italian priest who had spent over thirty years among the Somalis and he made two converts, and it amazed me that he got even those two. The Prophet has no more fervent, and ignorant, followers, but that is not their fault that they are ignorant.Their natural intelligence is second to none and when the education factories start work among them they should surprise Africa, and themselves.”

“I NEVER saw a Somali who showed any fear of death, which, impressive though it sounds, carries within it the chill of pitilessness and ferocity as well. If you have no fear of death you have none for anybody else’s either, but that fearlessness has always been essential to the Somalis who have had to try and survive hunger, disease and thirst while prepared to fight and die against their enemies, their fellow Somalis for pleasure in the blood feud, or the Ethiopians who would like to rule them, or the white men who got in the way for a while.” “Everytime a Somali got whipped, an Italian soldier was killed”

“Wandering in The Shag (desert) were Somalis with some of the sharpest intelligences in the continent, nomads who had been forced into being parasites of the camel, for centuries, and could anyone ever find a way of using all that courage and intelligence?” “There is no one alive as tough as the Somali nomad. No one. An askari wounded in a fight in the Haud country walked 14 miles holding his guts in his hand, was sewn up and lived to soldier again. And the women are as spiritually strong as their men.” “….You get into that way of thinking in the Somali waste. You think that way because the Somalis bitterly resent the white man, and struggle continually, and admirably, by lies and intrigue, to fight off his influence which spells the end of their peculiar world. You cannot beat them.

They have no inferiority complexes, no wide-eyed worship of the white man’s ways, and no fear of him, of his guns or of his official anger. They are a race to be admired, if hard to love.” 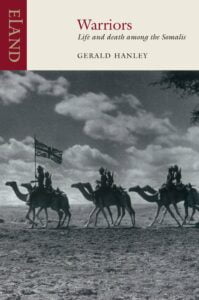